Pre-history around the corner

Today I will try to blogg in English for the first time. I hope it’ll be understandable… The reason that I do this is that I will submit this entry to the soon uppcoming “your nearest site – carnival” on the Aardvarchaeology blog. 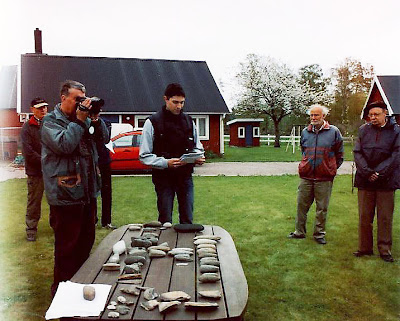 Some year ago I held an outdoor lecture about the area in question, here standing by the finds that the farmers had done on therir fields where the settlements are located. I realized that unfortunatley I have no pic on the actual settlements, but that is just some fields anyway, looking like every other fields.

One of the nearest archaeological sites of where I live (or actually where I used to live) is a couple of settlements lying more or less outside the door of my parents house south of the small village Bergkvara along the South-east coast of Småland in southern Sweden. The sites are known by the National Heritage Board (Riksantikvarieämbetet) as nr 256 and 257 and they consist of a fairly large number of ancient artefacts ploughed up by the farmers owning the land. Most of the finds belongs to the Stone Age and are of types that can be dated to between ca 8300-1800 BC. But there are also a few artefacts that belongs to the Bronze Age and early Iron Age 1800-500 BC and 500 BC – 400 AD. The presence of those latter periods is also supported by the existence of a Bronze Age cairn and a small Iron Age cemetery close nearby. There are also a lot of stray finds from the Stone Age in the surroundings.

None of the places has ever been excavated. Although I had the opportunity to do some field surveys in the area a few years ago. This resulted in one new settlement (registered under number 78 by the Board). The finds consisted of more than 200 knapped flint pieces mostly of a certain flint type named “Kristianstad flint” after the region in north east Scania where it originally came from. Among the finds where a transverse arrowhead, some scrapers, a very small fragment of a flint axe, a part of a grindstone used for stone axes and more. The finds may be dated to around 4000 BC or some time later. 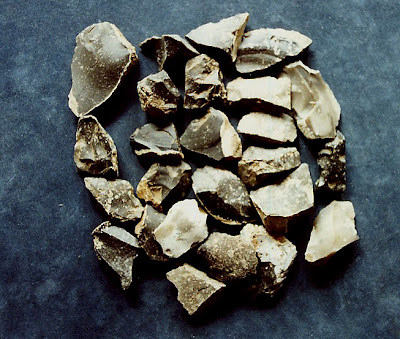 Some of the flints from the field survey.
Together all the settlements, stray finds and graves shows that the area has been fairly intensively used under several periods under a very long time, from the latest part of the Mesolitic to early Iron Age or even further if you count the present farms, which are probably of medieval origin. That is a time span of some 6000 years – at least. Under the period around 4000 BC the area might even have had some sort of central function in the society of the time.

Although this place does not contain any spectacular finds, no gold, no fancy stuff, I still think it’s pretty cool. Especially as it is really to live with pre-history around the corner.
Posted by Pierre at 3:02 PM

Tufft! Its really intresting to read an archaeological blog about things so close to where I grew up, not far from the Påbonäs borg.

History has always been an important part of my life and I am really thankful for what you are doing when you write these intresting texts.

Oskar: Thank you for those kind words! Påbonäs is by the way one of my favorite places and I have a long time had on my mind to write a blog entry about it, though it not yet had happend.

The English in your entry is quite understandable; well done.

I was born in Lund - with a wealth of history around me - but since age 8 have lived in Toronto where my mother's house - built in 1871 - is considered ancient.

Steve: thanks, I enjoyed yours too!

David: good to know the English wasn´t too lousy. Oh, dear old Lund, I spent some four years there during my education. The tower of the cathedral in Lund was built during the same decade as your house but that tower (replacing a medieval one) is considered as rather uninteresting because it is too young....